Unions want casual workers to be eligible for the JobKeeper payment.

Currently, the scheme doesn’t include casuals employed for less than 12-months.

The government is preparing to introduce legislation to amend the Fair Work Act – a move unions argue is unnecessary.

Unions want casual workers to be eligible for JobSeeker

Currently, the government wage subsidy scheme does not include casuals who have worked for less than 12-months.

Whether a person “could have reasonably expected to be working if it were not for the coronavirus”:

“I think the best way of thinking about it is if you could have reasonably expected to be working if it were not for the coronavirus, then you should get the JobKeeper allowance.

“So that is because either you had shifts booked, or you’ve been promised that you’d be working.

“There’s a reasonableness test to it.”

McManus acknowledged low paid workers will earn more with JobKeeper payments, while higher earners will be worse off.

She says “you’ve got to take those swings and roundabouts”.

In response, Attorney-General Christian Porter says he is “listening” to calls for the subsidy to be expanded.

However, he warns legislation to facilitate the scheme will pass parliament on Wednesday “no matter how late we have to sit”.

“The change will be happening next Wednesday, six million Australian jobs depend on it,” he said.

Porter’s commitment follows advice given to the expenditure review committee of cabinet.

The advice says the package cannot be implemented without changes to the Fair Work Act.

“Next Wednesday, we are pushing a $130 billion lifeboat out into the roughest economic seas Australia has ever seen and people will need to decide whether or not they are going to help us push that boat out, but it is going out on Wednesday, and we are not going to be arguing about timing and process and speculative possibilities in the weeks and months to come.”

Porter sought to assure those concerned the Fair Work Act changes have a sunset date built in.

However, he also acknowledged “a high level of honesty is going to be expected” of employers. 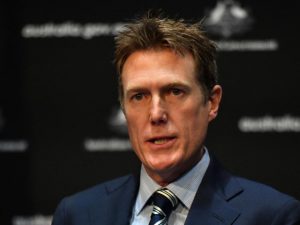 In contrast, McManus is telling Labor and the Greens to oppose changes to the Act because “they’re just not necessary.”

“There’s lots of industries at the moment that aren’t affected, or are actually doing well under this crisis because they’ve got a lot more business.

“You think about all of the utilities still working.

“There’s no need to change those agreements and if you have it imposed on workers, well then some employers unfortunately might take advantage of it.

“So we believe everything can be done without changing the current system.

“Just don’t tinker with those workers’ rights, we can make this happen.”

A key area of concern is the right of businesses to direct employees to take paid leave, while pocketing the JobKeeper Payment.

“Workers will make that decision to take leave rather than being on the JobKeeper allowance, because it’s going to be more money.

“But a whole lot of other employers that aren’t affected, well, should they just be able to direct everyone to take their leave?

“We’re worried that if you change the rights of workers unfortunately some employers might abuse that.”

Vulnerable bus drivers have had their special COVID-19 leave extended, after being told they need…

Queensland's growth industries recruiting new workers during the coronavirus are now revealed. The jobs are…